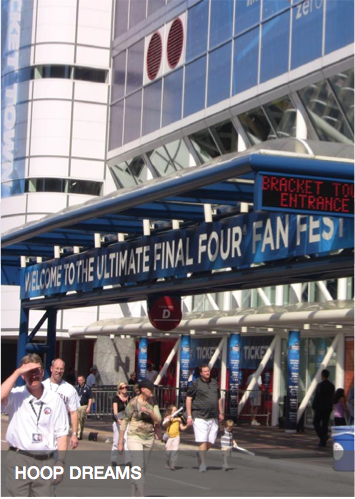 March Madness is all about college basketball and its fanatical fans, and this year was no exception at Houston’s George R. Brown Convention Center, home of the 2011 NCAA Bracket Town fan experience. Thousands of attendees of the Final Four tournament poured into the official fan zone early this spring to play with new gadgets, win prizes, shoot some hoops and collect some souvenirs. EM was there with Bracket Town Field Report co-presenter and leading experiential marketing agency Sparks (sparksonline.com/bracket- town), and we dribbled up some of the best brand activations on the floor.

The telecom giant was front and center in the exhibit hall, but it didn’t need to be to draw attention. The footprint was full of digital and physical interactives, and as a result, full of people, too. There were two side-by-side half-court shooting areas, where fans went head-to-head against each other and the clock in the Fastest 4G Shootout to see which could get the most baskets in 40 seconds. Nearby, people could text in their choice for which team would win the tournament. In the video activation booth, attendees recorded an “At the Half” highlight film in a news desk set. AT&T didn’t limit itself to the fan zone, though. Outside, it sponsored the AT&T Block Party, a huge concert and open-air festival, with a branded pavilion and big-name performers like Sublime with Rome and The Hold Steady. Agency: Team Epic, Atlanta.

The luxury arm of GM was inescapable in Bracket Town, thanks to its huge presence and title sponsorship of the Buick Center Court, where all the other sponsor brands had to partner up to get a piece of the main spotlight. The center court featured all the accouterments of a basketball stadium, including about 200 seats and a full-sized basketball court. Several of the other brands did major activations there, including LG, which sponsored a killer demo by its professional trick shooters, Kenny Dobbs and The Professor. To get onto the court, attendees walked through a display of Buick’s coolest cars. Alongside the showroom, Buick had a half-court set up for the “Baskets for Bare Feet” shoot-off competition. For every fan who stepped up to compete for a chance to win tickets to the Final Four games, the brand donated a pair of shoes to a local Houston charity. Whether it was for the tickets or the donations, the line to take a shot was out the door. Agency: InterSport, Chicago.

This two-part booth was a two-pronged attack on two types of men: those who are chasing excitement in the bars and those who are chasing their kids around the yard. The men who came inside had several choices for activations, including a green-screen photo that put them into the background of a famous basketball shot from the college careers of players like Magic Johnson and Larry Bird. A NCAA trivia game gave men a chance at a ball autographed by Bobby Hurley, a legend of Duke University basketball. On the shortened inbooth court, fans went head-to-head in a free throw contest to win tickets to the 2012 Final Four, and a spot on the leaderboard. Agency: Mindshare, New York City.

The network launched the Bracket Lounge in New York City’s Time Warner Center on March 14, and brought it to Bracket Town for the Final Four. Inside the lounge, fans took a load off on the comfy leather couches to watch footage from the tournament games on four large flat-screens, and on eight computer kiosks and mounted iPads, which were also loaded with tourney info and bracket-making tips and aids. For fun, fans could pose for a souvenir green-screen photo. After the photo shoot, fans got a printed snapshot that was also emailed to them. Agency: Gigunda Group, Manchester, NH.

LG was one of the biggest players at Bracket Town with a 5,000- square-foot LG Experience that leveraged interactive technology to spotlight the brand’s new 3D television, mobile phone and home appliance products. The first activity station, and the first chance to check in, was at a green-screen photo activation that invited guests to download their photo from the LG Facebook page after it was taken. Next up, at the LG Cinema 3D station, guests could try on 3D glasses and see themselves in 3D. At the appliances station, contestants raced against a clock and each other in a competition to load a washer and dryer, vacuum up some cereal and then unload the laundry in the fastest times. There was also a mobile gaming station and a music mixer, both to show off LG’s mobile phones, and all week the “kitchen stage” played host to local newscasts, lifestyle shows and celebrity chefs, as well as a coach’s cook-off.

Our favorite part: A barcoded, scannable Fan Pass allowed LG to track attendee activity, time spent in the exhibit and areas of interest. Post-event data showed that there were more than 34,000 swipes of the pass inside the space. A Facebook push at the entry to the Experience also helped double the brand’s “likes” on Facebook during March Madness. Love that.

At the end of their visit, staffers checked each guest’s Fan Pass and issued prizes ranging from headphones to a branded swag bag, depending on how many activities they had completed. The brand partnered with 65 local retail partners, representing thousands of individual stores, to drive sales around March Madness and earned some local love by donating the appliances from the kitchen and home areas to the United Way of Houston. Design/Build/Agency: Sparks, Philadelphia.

The credit card company was a huge presence, but in a slightly confusing way. It had 10 different sports games, focused on football, hockey, golf, lacrosse and several others. Everything in fact, except for basketball. The lines were long and the crowds were excited to play the games and take a chance for some CapitalOne swag. What we want to know is, if these are basketball fans, why not give them a taste of the action? 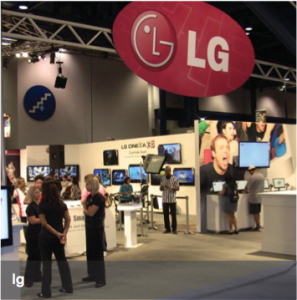 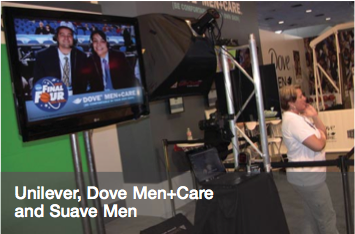 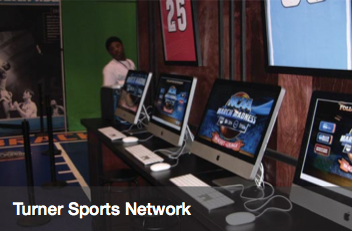 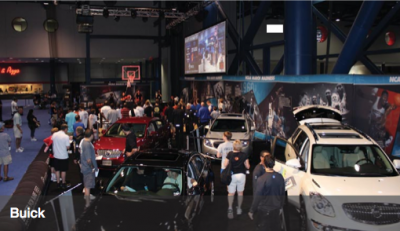 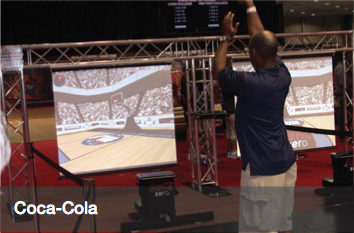